Published by Robert Minton On 21st July 2016 Leave a response 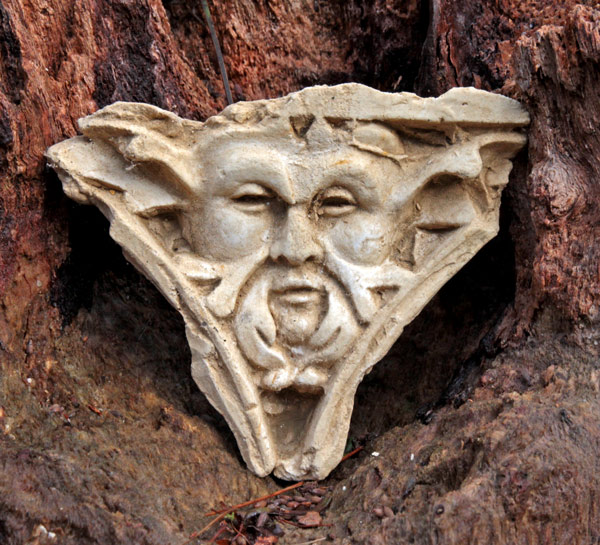 The Green Man is an ancient mythological character, believed to be pre-Christian
in his origins, but later adopted by Gothic carvers and placed in thousands of
churches and cathedrals all over Europe.

He is usually shown as a male head formed as a leaf mask,
often disgorging vegetation from his mouth.

He stands for humanity’s “deep kinship with nature and the
trees and woods” and for the cycle of renewal and rebirth.
An example of this is the end of the long dark
Winter and the return of the Spring and the
start of the cycle of growth.
Perhaps the Green Man can be best described
as a “Nature Spirit” or “Guardian of Nature”.

He is associated with Robin of the Wood,
the Green Knight of Arthurian legend, Jack in the Green,
the May King or Summer Lord, Cernunnos
and Herne the Hunter.

An old English name for the countryside is “Greenmans”
and this is a favorite name for taverns.
In London alone there are 30 pubs
called “The Green Man.”

He is celebrated today in May Day or Beltane
ceremonies all over Britain.

Perhaps the first person to really piece together the enigma
of The Green Man was Lady Raglan in 1939.
She became fascinated in folklore and after her
discovery of Green Men figures in St.Jeromes Church
in Llangwn in Monmouth, Wales she published an article
named “The Green Man in Church Architecture”.
Before the work of lady Raglan these characters were
mostly referred to as “Foliate heads”.

A pagan viewpoint of is that he is the male partner to Gaia
(or the Earth Goddess).
His appearance every Spring ensuring an abundant
and successful harvest.
This is fascinating and may be seen as ironic as
he is seen in so many churches , cathedrals and other
places of Christian worship!
Is this evidence of the existence of the Pagan beliefs
alongside the mainstream religion that was becoming dominant?

There are also a few Green Women.
These may be inspired by the Goddess Asherah
who was the consort of the God El and
Flora who was a Goddess of love and fertility.

I have reflected this in my selection of
Female Green Women.

But does the Green man have a place
in our modern world?

Our planet now faces more critical danger and threats
than it ever had done.
I believe the Green Man is more relevant now
than ever as a champion for the fight against
the major environmental
issues that now face our fragile planet.

If ever we need a powerful symbol to inspire
and guide us in the fight to try to halt the destruction
it is the Green Man.